Being vegan, I thought I’d said goodbye forever to quiche in 2004. Farewell also to lunches with broccoli cheese quiche and raspberry butter lettuce salad drizzled with Sicilian lemon balsamic. My sister changed all that with the following recipe she used last month during the pandemic. Not only was it better than I remembered, but it’s flexible and you can use any greens from the fridge.

LINDA’S QUICHE RECIPE
Make pie crust or buy a pre-made one. If you want it vegan and/or gluten free, you may have to make it. For her crust, my sister uses GF oat flour, vegan butter, nut or soy milk, apple sauce and a dash of salt).
Saute vegetables (suggestions: kale, onion, mushrooms, Beyond Bratwurst, broccoli, spinach). Add garlic, onion powder, pepper, Italian seasoning to taste.
In a bowl, mix: one bottle of Just Egg, 1/4 cup almond milk, 1 cup oat flour, 1 tablespoon baking powder, four slices of Daiya cheese (break into pieces). She mixes cheddar and provolone Daiya cheese. Others may prefer pepper jack and mozzarella.
Add saute to liquid mixture and pour into pie crust.
Bake one hour to one hour and fifteen minutes at 350 degrees, until top is light brown and knife inserted just off center comes out clean.
NOTES: If you can’t find Just Eggs (we buy it at a Kroger’s store and for California, that’s Ralphs. Fry’s for Arizona. Fred Meyers for the Northwest.) If you’re okay with soy, you can use tempeh or tofu instead of Just Eggs. If you do, you’ll need to add more nut/soy milk.
As you can see, my family isn’t into specifying the amount of ingredients. Everything is an experiment and to the cook’s taste. My sister prefers bland.  My mom and brother use a heavy hand with seasonings. No one uses salt, although it’s on the table for those who must have it.

I guess I was craving it as I’ve an entire scene in Her Last Mission featuring quiche. 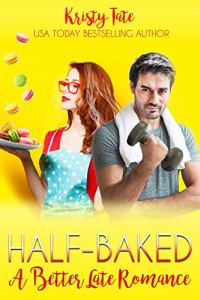 Speaking of seasoned romances, I’d preordered another BETTER LATE ROMANCE: Kristy Tate’s Half-Baked novel. The novel is double-chocolate donuts meets kefir. I’ve been waiting for what feels like forever for this book. TODAY is its launch day. I finally get to eat this book.

When Stephen Fox, a health food nut, opens a sporting goods store and café across the street and some of Maggie’s loyal customers begin to replace their morning donuts with gluten-free grub, Maggie’s ire, as well as her yeasty rolls, begins to rise.
Stephen is obsessed with a charming masked woman in a butterfly costume he met at a Mardi Gras party. Imagine his horror when he learns Maggie, the obnoxious baker who has been trying to ruin his business from day one, is the masked woman he’s been searching for!
Can two people from separate grocery store aisles overcome their differences?

Family friendly, fast, and fun featuring the over fifty crowd.

I’m grateful to readers who review my books. I hope you’ll consider writing a review of Kristy Tate’s Half-Baked at Amazon or Goodreads.

In 2011, I left engineering to write full-time. Between the years 1992 and 2011, I’ve published 14 stories with Alfred Hitchcock’s Mystery Magazine that have featured the hypochondriac detective Micky Cardex and two stories that did not. The 1998 story “No, Thank You, John” was nominated for a Shamus award. Many of these stories have been included in anthologies and translated in multiple languages. With Neal Shusterman, I’ve also published a science fiction story for the More Amazing Stories anthology (Tor) published in 1998 and co-authored with Neal Shusterman an X-Files Young Adult novel (DARK MATTER) for HarperCollins in 1999 under the name Easton Royce. For Simon & Schuster in July 2012, we published an e-novella UNSTRUNG in Neal's UNWIND world. I have graduate degrees in English and Electrical Engineering.
View all posts by mlknowlden →
This entry was posted in Food, health, Uncategorized, WRITING and tagged bakery, Better Late Romance, cheap books, Half-Baked, health food, Kristy Tate, pandemic food, Quiche, seasoned romance, sweet romance, vegan recipe. Bookmark the permalink.

1 Response to Half-Baked and Pandemic Quiche