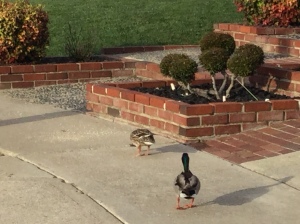 If I took Sabbath seriously, what would it look like? Real rest: what is that? Not answering to my demands for production and perfection. Not being on point, at red alert, watching a clock.

Am I capable of releasing the tiller?

Yesterday I took an unscripted Sabbath. I attended my Quaker church, open to possibilities. I returned home for a peanut butter and jam sandwich, a totally un-Sunday lunch. I was invited to a local art gallery. That sounded spontaneous. The showing was themed with unexpected diverse works. Nice.

From there I stopped at a market that I’d not intended to enter, turned into the parking lot when I’d meant to drive by. Bought random stuff. Stopped at the milk tea place next door and tried a soy milk mung bean tea with boba because I’d never tried that before. It was good!

I’d intended to watch a Master Class but took a nap instead. Woke ninety minutes later, refreshed. Took a walk, heading for a street I’d never tried. Saw the mallards in the picture above also taking a stroll. The light at 5:30 pm created sharply-defined shadows. Six days per week, my walks are programmed 30-45 minutes long. Yesterday I entered my front door after 28 minutes and didn’t feel a speck of guilt. 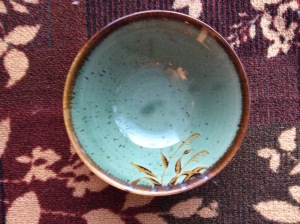 Made a dinner I spotted in NY Times this morning. I didn’t have access to the recipe so I winged it. Broccoli soaked in a Soy Maple marinade for thirty minutes and then roasted for 20 minutes in my toaster oven at 400 degrees. I added walnuts in the last five minutes, then spooned it on California sprouted rice and dusted it with sesame seeds. I devoured it in a bowl I bought in Little Tokyo years ago. I’ll be cooking this again.

After dinner, I saw Avengers: Infinity War instead of continuing to binge-watch Eureka episodes. I followed it up by watching Steve Martin teach a Master Class about gathering material through observation. Another theme I discovered yesterday. The class on comedy wasn’t on my class list to finish this year.

I enjoyed my unscripted Sabbath. I’m ready for the coming week and excited about what next Sunday will bring.

In 2011, I left engineering to write full-time. Between the years 1992 and 2011, I’ve published 14 stories with Alfred Hitchcock’s Mystery Magazine that have featured the hypochondriac detective Micky Cardex and two stories that did not. The 1998 story “No, Thank You, John” was nominated for a Shamus award. Many of these stories have been included in anthologies and translated in multiple languages. With Neal Shusterman, I’ve also published a science fiction story for the More Amazing Stories anthology (Tor) published in 1998 and co-authored with Neal Shusterman an X-Files Young Adult novel (DARK MATTER) for HarperCollins in 1999 under the name Easton Royce. For Simon & Schuster in July 2012, we published an e-novella UNSTRUNG in Neal's UNWIND world. I have graduate degrees in English and Electrical Engineering.
View all posts by mlknowlden →
This entry was posted in travel, Uncategorized, WRITING and tagged Avengers: Infinity War, ducks, Master Class, Sabbath, Soy Maple marinade, Steve Martin, walking. Bookmark the permalink.