A Nod to the Past 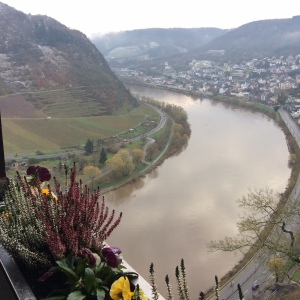 My current work in progress is set in Ancient China. I’ve yet to set the climate. I’ve been feeling the January chill in Southern California’s nights and mornings, so maybe there’ll be snow in the forecast.

The photo to the left was taken from Germany’s Cochem castle’s balcony. The visit was on my 2015 Viking Paris to Prague trip where it was a 30 degF that day. If you missed that report, you can read it HERE. 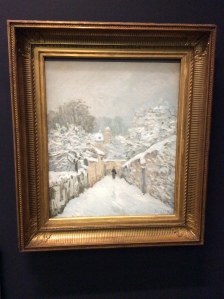 We’re playing with flash fiction at Facebook’s Charmed Connection in anticipation of the anthology’s release. I submitted a photo of a painting I took at the D’Orsay during that trip. It was so short a time after the Paris bombings that the art museum was lightly attended. Our boat had thinned out as well so portions were huge that Thanksgiving. We had to eat for those who’d stayed home. 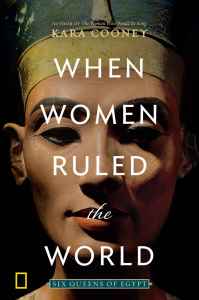 I attended Dr. Kara Cooney’s talk at the Bowers museum last Saturday. She’s a UCLA (rah!) professor, Egyptologist, and moderated a Discovery Channel series Out of Egypt. Her latest book for National Geographic talks about the six female rulers of ancient Egypt. Illuminates why it was possible there and not possible in modern USA.

Unlike the MC in Midnight in Paris, I’m not nostalgic for the past. I love to read books set in the past. I love to attend lectures about ancient times. History fascinates me because it sheds light on the present, a place I’m happy to live with its foibles, central heating, and vegan frankfurters.

In 2011, I left engineering to write full-time. Between the years 1992 and 2011, I’ve published 14 stories with Alfred Hitchcock’s Mystery Magazine that have featured the hypochondriac detective Micky Cardex and two stories that did not. The 1998 story “No, Thank You, John” was nominated for a Shamus award. Many of these stories have been included in anthologies and translated in multiple languages. With Neal Shusterman, I’ve also published a science fiction story for the More Amazing Stories anthology (Tor) published in 1998 and co-authored with Neal Shusterman an X-Files Young Adult novel (DARK MATTER) for HarperCollins in 1999 under the name Easton Royce. For Simon & Schuster in July 2012, we published an e-novella UNSTRUNG in Neal's UNWIND world. I have graduate degrees in English and Electrical Engineering.
View all posts by mlknowlden →
This entry was posted in travel, Uncategorized and tagged China, Cities of Light, Cochem, Cochom, Egypt, Kara Cooney, paris, Paris to Prague, Viking river cruise. Bookmark the permalink.