Stuck for an idea for someone you forgot or for a reader friend who’d love a fun read over the holidays? Amazon makes it easy to gift these ebooks with your heartfelt message attached.

How about a 99 cent paranormal novelette The Last Storyteller that is the first book in the Ravenscar shifters series? It’s a second chance sweet romance of raven shifters and a mystery. Miri returns to her small California home town to investigate her sister’s death. Fifteen years earlier, she’d fled when Elise claimed Miri’s fiancé was the father of her baby. Did her sister die in a storm or had she committed suicide. Or had someone killed her over the old scandal?

Or maybe your mystery fan would prefer the first novella in the Abishag mystery quartet? In Sinking Ships,  college student marries a vegetative man in hospice and finds his hospice aide murdered on her wedding night. Set in Palos Verdes, California, it’s a cozy mystery for the young at heart. Another steal at 99 cents.

The Deluded Detective series features an ex-science teacher now private detective who searches for missing children. In the first novella Jack Fell Down, Pam finds an unexpected connection between the accident that disabled her and the hallucination of a missing boy. Also always available for 99 cents.

Looking for a quick read for a friend or family member who has no time read? Found Dead in Arugula, a short cozy mystery that you can read during lunch is the ticket! A Quaker widow who finds a neighbor dead in her garden is accused of his murder. Chock-full of lost love and good eats, it is the first story in the Faith Interrupted series.

And now for the second book in the Ravenscar Shifters series is available for pre-order, a full–length novel! Delivery on 22 December. Price will increase on a random day between Christmas and 03 January 2019, so grab it now. 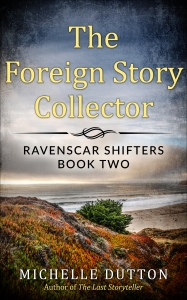 Michelle Dutton is the pen name I use for my romance line. For anyone who has visited California’s coastline, you might recognize this spot. The Foreign Story Collector takes place in central California in a raven shapeshifter community called Ravenscar that stretches from the beach to the Sierra mountains. Some of the action takes place on an island used for military defense during WWII.

A story collector working among raven shapeshifters? It’s got disaster all over it. In spite of the sweet complication of a handsome widower, she shouldn’t have been surprised when it led to her arrest.

The Foreign Story Collector can be pre-ordered now and will be released on December 22. The price will increase after Christmas to what’s reasonable for a full length novel.

If you like the book(s), I hope you’ll consider leaving a review on Amazon or Good Reads. Reviews really do help the author and readers!

In 2011, I left engineering to write full-time. Between the years 1992 and 2011, I’ve published 14 stories with Alfred Hitchcock’s Mystery Magazine that have featured the hypochondriac detective Micky Cardex and two stories that did not. The 1998 story “No, Thank You, John” was nominated for a Shamus award. Many of these stories have been included in anthologies and translated in multiple languages. With Neal Shusterman, I’ve also published a science fiction story for the More Amazing Stories anthology (Tor) published in 1998 and co-authored with Neal Shusterman an X-Files Young Adult novel (DARK MATTER) for HarperCollins in 1999 under the name Easton Royce. For Simon & Schuster in July 2012, we published an e-novella UNSTRUNG in Neal's UNWIND world. I have graduate degrees in English and Electrical Engineering.
View all posts by mlknowlden →
This entry was posted in Uncategorized, WRITING and tagged 99 cent books, cheap books, gift ideas, mysteries, paranormal romance, pre-order, Ravenscar Shifters, The Foreign Story Collector, The Last Storyteller. Bookmark the permalink.