Memory of a Chilly Day in December

Posted on February 9, 2018 by mlknowlden

The bird bath froze solid last night; it was about 15 degrees. It’s supposed to warm to 47. We walked the Pinnacle trail this morning with the two dogs. We passed a beautiful Australian Shepherd with his people and saw circles of petroglyphs. The picture above of Willow Lake and the dells was taken on the walk. My sister learned about the trail from a man walking his macaw.

The photo to the right shows a petroglyph. 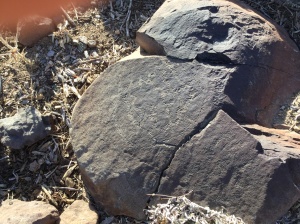 The only sushi available in town is at Frys grocery store from a chef so authentic, he speaks no English. My brother and I shared two vegan rolls, an avocado roll especially made for us, and seaweed salad for lunch.

We stopped at the Tractor Supply Company for birdseed. I’ve never said those words before. The hummingbirds have disappeared for the winter, but the yard is filled with sparrows, doves, pigeons, and lots of goldfinches. A falcon visits randomly.

I sometimes look for the ghosts of Wyatt Earp and Doc Holliday in the rocks or among the dells. Not seen them, but there’s always tomorrow.

In 2011, I left engineering to write full-time. Between the years 1992 and 2011, I’ve published 14 stories with Alfred Hitchcock’s Mystery Magazine that have featured the hypochondriac detective Micky Cardex and two stories that did not. The 1998 story “No, Thank You, John” was nominated for a Shamus award. Many of these stories have been included in anthologies and translated in multiple languages. With Neal Shusterman, I’ve also published a science fiction story for the More Amazing Stories anthology (Tor) published in 1998 and co-authored with Neal Shusterman an X-Files Young Adult novel (DARK MATTER) for HarperCollins in 1999 under the name Easton Royce. For Simon & Schuster in July 2012, we published an e-novella UNSTRUNG in Neal's UNWIND world. I have graduate degrees in English and Electrical Engineering.
View all posts by mlknowlden →
This entry was posted in Food, health, Uncategorized, WRITING and tagged Food Choices, hiking Prescott, Prescott Hikes, Rails to Trails, Watson Lake, Whole Foods plant based. Bookmark the permalink.