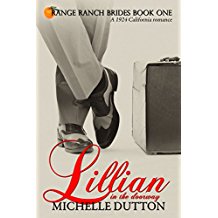 To introduce readers to Michelle Dutton’s romances, Amazon offers the historical suspense novel Lillian in the Doorway FREE October 28 to November 1st. The novel includes two excerpts: one from my first Abishag mystery Sinking Ships and the second is from the first book in the Ravenscar Shifters series The Last Storyteller. Sinking Ships is available for 99 cents at Amazon. The Last Storyteller will be available very soon. In fact, my next blog post will announce the date.

Until then, please pick up Lillian in the Doorway FREE for a limited time. Here is a teaser.

A pharmacist falls in love with his fake fiancée in a novel about orange ranches in 1920s California, gangsters, and finding a home. 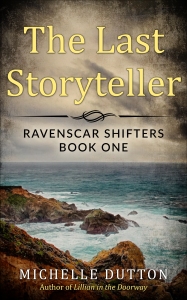 And now for the cover reveal!

Michelle Dutton is the pen name I use for my romance line. For anyone who has visited California’s coastline, you might recognize this spot. The story takes place in central California in a raven shapeshifter community called Ravenscar that stretches from the beach to the Sierra mountains. A lot of action takes place on the beach, but throughout the novella, the characters sense “a squall is coming.” When you look at the cover, can you sense a squall coming, too?

Lillian in the Doorway (FREE for a limited time)

If you like the book, I hope you’ll consider leaving a review on Amazon or Good Reads. Reviews really do help the author and readers!

In 2011, I left engineering to write full-time. Between the years 1992 and 2011, I’ve published 14 stories with Alfred Hitchcock’s Mystery Magazine that have featured the hypochondriac detective Micky Cardex and two stories that did not. The 1998 story “No, Thank You, John” was nominated for a Shamus award. Many of these stories have been included in anthologies and translated in multiple languages. With Neal Shusterman, I’ve also published a science fiction story for the More Amazing Stories anthology (Tor) published in 1998 and co-authored with Neal Shusterman an X-Files Young Adult novel (DARK MATTER) for HarperCollins in 1999 under the name Easton Royce. For Simon & Schuster in July 2012, we published an e-novella UNSTRUNG in Neal's UNWIND world. I have graduate degrees in English and Electrical Engineering.
View all posts by mlknowlden →
This entry was posted in Uncategorized and tagged FREE, free books, historical, historical romance, Lillian in the Doorway, new releases, Shapeshifter fantasy, Shapeshifter romance, Sweet romances, The Last Storyteller. Bookmark the permalink.