While on a marathon edit session today of my mystery Olive Tomorrow, I decided to optimize my breakfast porridge prep. A half hour before I intended to eat, I half-filled a 16 ounce canning jar with Coach oats and added water nearly to the top. After capping the jar, I shook it every time I was in the kitchen. I also poured a half cup of frozen berries in a glass and topped with water to thaw. In my breakfast bowl, I added a tbsp of ground flax seed, tbsp of chia seeds, 1/3 banana, shredded coconut, fresh, shredded basil leaf, a dash of cinnamon and a dash of cardamom.  When I was ready to eat, I poured the thickened oats into the bowl with the oat milk. I added the thawed berries without the water. No cooking or pots to clean. Healthy, vegan, and tasty!

In Indelible Beats, my second Abishag mystery, Leslie and her friends savor hot oatmeal and the winter holidays while waiting for her “husband” to die. That oatmeal was based on a crockpot recipe that they also doctored with herbs, seeds, berries, and nuts.

A friend who lives in Africa taught me about refrigerator oatmeal which you can make the night before. My recipe here is based on that, but is room temp and refreshing for hot summer mornings. You can find both the refrigerator and crockpot oatmeal recipes at the allrecipe and fitness pal sites. If you have a better one, please leave the info in the comments. Let’s get heart healthy and save the planet in 2017! 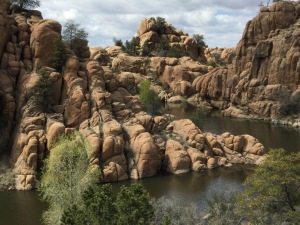 While I was in Prescott, Arizona a few weeks ago, I did a hike on April Fools’ Day. The hike was part of the rails to trails program on the Watson Lake Loop.  The hike took me about two hours 15 minutes to trek half of the loop and return to the Humane Society parking lot. I did stop often to take pictures because the scenery was spectacular. I heartily recommend this hike. It was fun to see where train passengers of the old west traveled. The trail that Saturday was not crowded or noisy, but we saw a goodly number of hikers of all ages, some with dogs.

Back to the edits. I finished chapter five before lunch. On to chapter six!

In 2011, I left engineering to write full-time. Between the years 1992 and 2011, I’ve published 14 stories with Alfred Hitchcock’s Mystery Magazine that have featured the hypochondriac detective Micky Cardex and two stories that did not. The 1998 story “No, Thank You, John” was nominated for a Shamus award. Many of these stories have been included in anthologies and translated in multiple languages. With Neal Shusterman, I’ve also published a science fiction story for the More Amazing Stories anthology (Tor) published in 1998 and co-authored with Neal Shusterman an X-Files Young Adult novel (DARK MATTER) for HarperCollins in 1999 under the name Easton Royce. For Simon & Schuster in July 2012, we published an e-novella UNSTRUNG in Neal's UNWIND world. I have graduate degrees in English and Electrical Engineering.
View all posts by mlknowlden →
This entry was posted in Food, health, Uncategorized, WRITING and tagged editing, Food Choices, hiking Prescott, Indelible Beats, oatmeal recipe, Prescott Hikes, Rails to Trails, Vegan meal plan, Watson Lake, Whole Foods plant based. Bookmark the permalink.

4 Responses to Edits, Porridge, and a Fool’s Day Hike