Close to Earth: Flying from LAX to Prescott 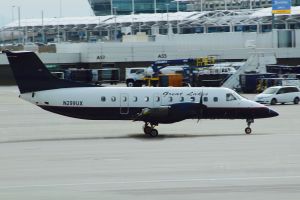 In September, I drove to Prescott, Arizona and tried two different routes. More recently, I decided to try the newly minted service offered by Great Lakes Airlines: flying from LAX to Prescott on their Embraer EMB 120 Brasilia, a twin-turboprop commuter airliner. It boasts 30 seats, a restroom, and a flight attendant.

While working on the Space Shuttle program in the 80s, it was not uncommon for me to fly from Long Beach to Palmdale to support testing. I flew in Aero Commanders (the smallest), Twin Otters (a 19-seater), and a Fokker. The latter plane was ancient and certainly improved the fervency of my prayer life. Since then, I’ve also flown in commercial small-prop planes in Canada and in Northeastern US. So I need scarcely raise an eyebrow at a one hour flight to Arizona, yes?

As another passenger said, the most difficult part of our flight to Prescott was getting to LAX. We had seven passengers in our OC to LAX shuttle van as we headed to the airport at rush hour. Due to construction of a new train line and station, Century Blvd and environs were a war zone, causing me to hunch my shoulders in disbelief and despair.

Since I was the first to arrive for the 11:40 flight, the clerk at the check-in counter had to boot up the computer. In terminal six, I armed myself with Starbucks cold brew coffee and hovered at the bus connection gate.  Not long after 11:00, we nine passengers were ushered into a bus that traversed the same runway as a 777 Dreamliner operated by EVA airlines.  We stopped several times to allow the plane to cross in front of us because, you know, it’s huge.

We arrived at our plane, dumped our small suitcases at the door, sat in our seats, and were soon rolling to … sit in a long queue of planes waiting to take off.  We were in the air about noon. Our flight attendant Jewell served coffee and water with good humor. Between announcements by Jewell, the flight deck and trading stories with other passengers, I read an article on Malta and had just cracked open a Wired magazine when we were prompted to ready ourselves for landing. 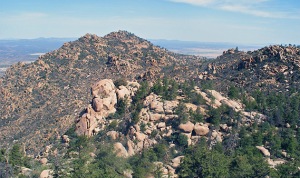 Through the window to my left, the crags and crevices of Granite Mountain were so close I could almost touch them. Turning to the passenger across the aisle, whose eyes were as wide as mine, I said, “Don’t see that everyday!”

After an hour and thirty minutes of smooth flying, we landed and disembarked. My suitcase was waiting five feet away as if it had just then materialized there from LAX, the terminal was twenty feet away, my brother was waiting in a lounge about as big as the average living room, his car was about twenty feet from the terminal door … and we were off to the farmers market for samosas, beets, and arugula sprouts.

I can heartily recommend Great Lakes Airlines for a flight from LAX to Prescott. Now if we could only beam from our front doors to terminal six at LAX as easily.

In 2011, I left engineering to write full-time. Between the years 1992 and 2011, I’ve published 14 stories with Alfred Hitchcock’s Mystery Magazine that have featured the hypochondriac detective Micky Cardex and two stories that did not. The 1998 story “No, Thank You, John” was nominated for a Shamus award. Many of these stories have been included in anthologies and translated in multiple languages. With Neal Shusterman, I’ve also published a science fiction story for the More Amazing Stories anthology (Tor) published in 1998 and co-authored with Neal Shusterman an X-Files Young Adult novel (DARK MATTER) for HarperCollins in 1999 under the name Easton Royce. For Simon & Schuster in July 2012, we published an e-novella UNSTRUNG in Neal's UNWIND world. I have graduate degrees in English and Electrical Engineering.
View all posts by mlknowlden →
This entry was posted in Engineering, travel, Uncategorized and tagged EMB 120, Great Lakes Airlines, LAX, Prescott, space shuttle. Bookmark the permalink.

2 Responses to Close to Earth: Flying from LAX to Prescott