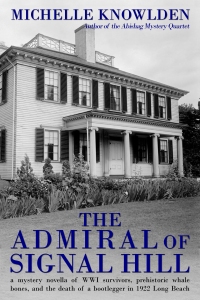 To celebrate the release of Michelle Dutton’s Lillian in the Doorway, Amazon offers the enovella The Admiral of Signal Hill FREE July 22-26. Here’s a description of the 1922 mystery.

In 1922, Alice and her private detective boss leave their Chicago office to consult on a bootlegger’s death in Long Beach, California. Discovering that Robbie’s murder is linked to two others, Alice and Joe meet with a housekeeper having a litany of opinions and stories, an unforgettable handyman, a rich man’s mad wife, and the Admiral who lives under Signal Hill.

In the haunting shadow of battlefield trenches and prehistoric whale bones, this mystery novella tells of WWI survivors, their friends, and the ghosts that haunt them. 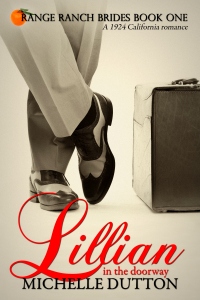 The 1924 romance novel Lillian in the Doorway will be offered for a dollar less in the first two weeks of its release. What a deal!

How far would you go to protect the ones you love?

When Chicago gangsters kills her detective boss, Lillian Pratt flees to California. Now living with a new identity, she teaches Americanization classes on orange ranches. To appease her fellow boardinghouse teachers, she agrees to a fake engagement with the local pharmacist, Jens Schreiber, a German widower beleaguered by his own friends to remarry.
She must face gangsters, ghosts, and Jens’s fearsome mother or run again to save the ones she loves.

Lillian in the Doorway by Michelle Dutton

The Admiral of Signal Hill by Michelle Knowlden

If you like the book, I hope you’ll consider leaving a review on Amazon or Good Reads. Reviews really do help the author and readers!

In 2011, I left engineering to write full-time. Between the years 1992 and 2011, I’ve published 14 stories with Alfred Hitchcock’s Mystery Magazine that have featured the hypochondriac detective Micky Cardex and two stories that did not. The 1998 story “No, Thank You, John” was nominated for a Shamus award. Many of these stories have been included in anthologies and translated in multiple languages. With Neal Shusterman, I’ve also published a science fiction story for the More Amazing Stories anthology (Tor) published in 1998 and co-authored with Neal Shusterman an X-Files Young Adult novel (DARK MATTER) for HarperCollins in 1999 under the name Easton Royce. For Simon & Schuster in July 2012, we published an e-novella UNSTRUNG in Neal's UNWIND world. I have graduate degrees in English and Electrical Engineering.
View all posts by mlknowlden →
This entry was posted in Uncategorized and tagged 1920s, FREE, mystery, Romance. Bookmark the permalink.