From Daughters to Death: Scrubbing My Prose in 30 Days, Report Four

I had fun with my June Challenge this week. Scrubbing my prose indeed! Included here are published works and works-in-progress. These challenges surely made me think.

Challenge Twenty: an argument between mother and daughter

Difficulties between Leslie and her mother are mentioned in the first three books.  In the final Abishag mystery, An Eggshell Present, they have a tense phone call shortly before a face-to-face.

I cringed when I heard my mother’s voice, rigid with anger. “Leslie. About time you answered. Your father’s worried sick. Why haven’t you returned my calls?”

“Never mind the excuses. What are you doing about your father’s campaign finances?”

The smell of orange blossoms floated in from the open patio sliders. I sighed and settled on the couch. This could be a short or a long call.

Challenge Twenty-one: a paramedic at the end of shift without using flashbacks

Instead of a paramedic, I’ll use medical student Douglas Kovic, otherwise known as Dog, in the Abishag series. He is the hospice aide for Leslie’s vegetative husbands. His end of shift is the start of hers.  Here is a conversation between the two in the second Abishag mystery, Indelible Beats.

The feeding and trach tubes had been disconnected. Still tethered to the monitoring leads, I could hear the ping of Jordan’s heartbeats and his shallow breaths.

“Doctor Millerand said he could last the night,” Dog said. “Maybe through tomorrow and even into Christmas. He’ll be calling for regular reports but not till morning. He didn’t want you disturbed. You want me to stay for a while?”

Still concentrating on Jordan, I shook my head. Dog was being kind, but he knew that an Abishag’s night with her husband was sacred and for us alone.

As Dog headed for the door, I whirled. Even though this wasn’t my first wedding night with a comatose husband, I suddenly panicked. “If he should…”

“Come get me. I’m down the hall.” He spoke softly, as if to a frightened child. “Don’t worry, Les.

I’m editing my second shapeshifter romance in the Ravenscar series. In The Foreign Story Collector, six-year-old Delia Turner has the following conversation with Callie, the story collector.

Watching Delia’s dramatic deliverance of her plight, Callie had an idea. “Would you like to learn how to be a storyteller?”

Not sure if she wanted to be pulled from the delights of her sulk, she narrowed her eyes at Callie. “I’m little. I can’t be a storyteller.”

“You think Miri started when she was big? She was about your age when she started training. Shoot, she might have been even younger.”

“What do I gotta do to start?” Feverish passion colored her face and left her twitchy as a cat eyeing its prey.

Challenge Twenty-three: the peak of a book’s climax 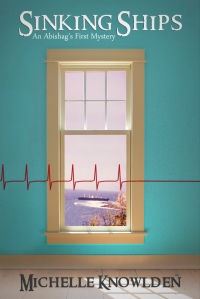 In the first Abishag mystery Sinking Ships, here’s a line that I think qualifies…

I screamed. The gun veered toward me but not fast enough.

I’m also finishing a discovery draft of a Young Adult Dystopic novel tentatively titled The Ghosts of Thirds. The trainer drives our young hero to do something rash near the beginning of the book.

Rafe knew Bassano would think him defiant. He knew back home his step-father would whip that insolence from him. He didn’t care. Yesterday he’d been sold by his family. He was a slave to a corporation where’d he’d probably die within months. He’d been teamed with two trainees who didn’t want him because he was a boy. And he missed Lorna and his dog.

Challenge Twenty-five: the point where all is lost

The following is from the 1924 work-in-progress Lillian in the Doorway:

How had all her careful planning come to this? She couldn’t let him take the boys. No matter what the rogue said, he would kill all witnesses. 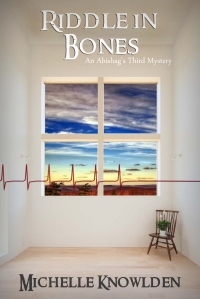 Actually all the Abishag mysteries have death.  After all there is murder in the histories of the vegetative husbands and sometimes the death of the comatose husbands too.  Here’s Leslie’s reaction to the death of her third husband in Riddle in Bones.

I also missed Henry. I’d been married to him longer than my previous husbands: 39 days. As if sensing the fall quarter would start Monday, he died last Thursday either not wanting to live through another academic quarter or not wanting the students who attended him to miss it. Or maybe because we finally finished the child’s history of King Arthur’s court.

That’s it for the fourth chunk of days in June. See you next Sunday for the final challenges!

Please join us for a virtual breakfast with an author this Friday.

Till then, happy reading.

In 2011, I left engineering to write full-time. Between the years 1992 and 2011, I’ve published 14 stories with Alfred Hitchcock’s Mystery Magazine that have featured the hypochondriac detective Micky Cardex and two stories that did not. The 1998 story “No, Thank You, John” was nominated for a Shamus award. Many of these stories have been included in anthologies and translated in multiple languages. With Neal Shusterman, I’ve also published a science fiction story for the More Amazing Stories anthology (Tor) published in 1998 and co-authored with Neal Shusterman an X-Files Young Adult novel (DARK MATTER) for HarperCollins in 1999 under the name Easton Royce. For Simon & Schuster in July 2012, we published an e-novella UNSTRUNG in Neal's UNWIND world. I have graduate degrees in English and Electrical Engineering.
View all posts by mlknowlden →
This entry was posted in Uncategorized, WRITING and tagged admiral of signal hill, editing, Lillian in the Doorway, walla walla onions. Bookmark the permalink.

2 Responses to From Daughters to Death: Scrubbing My Prose in 30 Days, Report Four