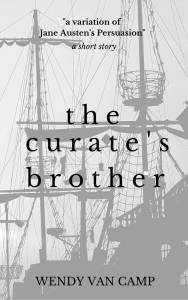 On the first Friday of April 2016, we are having breakfast with author Wendy Van Camp.  Wendy is the author behind No Wasted Ink, a blog about the craft of writing that features author interviews, sci-fi and fantasy book reviews and scifaiku poetry. Wendy’s articles, short stories and poems have appeared in literary and science fiction magazines such as “Shadows Express”, “Luna Station Quarterly”, “Serendipity”, and “Far Horizons”. Her first Amazon ebook is a regency romance entitled, “The Curate’s Brother: A Jane Austen Variation of Persuasion”.

For my breakfast, I’m having a fried egg on a bed of sunset lettuce. Wendy, what are you having?

My Dream Breakfast is a big stack of 49er Flapjacks with syrup and butter along with a side of breakfast sausage and a good mug of coffee.

Yum, flapjacks. I like the pumpkin kind! So tell us about your writing process from concept to draft to revision.

My process starts with composition notebooks. I brainstorm ideas with paper and fountain pens. I put down ideas for characters, settings, a twist I might use toward the end. I have notebooks with lots of ideas lying around. Perhaps a quarter of my ideas are used in actually stories. Next I write down a “beat sheet” in the notebook. This is a custom one that I’ve developed for myself loosely based on Blake Snyder’s “Save the Cat” beat sheet. I start to work on the plot, using a front back method. I write down the beginning, then I do the very end. Then I take a step back and do the scene before the end and the one right after the beginning. In this manner I work to the middle. Each section is perhaps a paragraph in length, giving only the barest of details about the scene.

At this point I go electronic. My writing software of choice is the Windows version of Scrivener. I set up a project file for the story and create files for each of the scenes that I have outlined in the beat sheet. I do not draft in Scrivener. I use my composition notebook and an Alphasmart Neo (a sort of digital typewriter) and go outside my home office to work on the rough draft in coffeehouses. To get the work done I need to move myself away from distractions at home and I find that this is the best way to turn off the world and allow my creativity to come out. Besides, it is a great way to get coffee while I write! As I work on the rough draft, I upload the finished scenes into the Scrivener files that I have created for the project. Once all the scenes are roughed out. I return to my desktop.

I do content revisions first. Does the story make sense? Is it exciting? Does what the characters do seem logical and motivated? Next comes POV checks, continuity, and general clean up between the scenes. I try and take out all those little transition phrases and give my scenes as clean a break as possible. The final step is to run the story through my editing software. I look for repeated words, passive voice, adverbs, and cliché phrases. After the software check, I take the short stories to my monthly critique group and get feedback from them. If it is a novel, I give it to the beta readers. Based on their feedback I go in and do final touch ups to the story.

I worked on a Neo during one Nanowrimo, and I rarely start a new project without doing a beat sheet.  Bless you, Blake Snyder!  Tell us about The Curate’s Brother.  Why this series, why now?

I’ve been working on a Victorian steampunk series for the past five years.  It is usually the main project I use for Nanowrimo and is around four to five books long.  In 2011, I wanted a break from the story and being a huge Jane Austen fan, I started to write an Austen variation that I called “Letters From The Sea” that featured the characters from Austen’s novel “Persuasion”.  I do not follow the plot of Austen’s novel, instead I take the characters out for a unique spin of my own.

I had no idea that historical fiction took research and that the pacing and tropes were different from science fiction and fantasy, the two genre that I usual work in.  My first attempt at writing a historical romance was a complete failure and I put the novel away in my files, returning to my science fiction series.  At that point, I started to read regency romance novels by other authors and learned the tropes of the genre. I must have read around 80 novels during 2012 during this intensive study period.  At this time, I was gaining my certification as a gemologist and part of that training included jewelry appraisal.  Both regency and Victorian era jewelry and art was included in the training which gave me much historical information about the time period.

In 2014, I reopened the regency failure and re-examined it.  I noticed that the first chapter was written in the POV of Edward Wentworth, the Captain’s brother who was a curate in the made up village of Monkford, England.  I grew intrigued by this character and decided that I would expand his story and create a summer romance for him that would occur during the time when Anne Elliot and Frederick Wentworth meet and have their short, doomed love affair and engagement.

When I finished “The Curate’s Brother”, it was only around five thousand words long.  I took it to my science fiction critique group and it was universally panned.  Some of the men in the group refused to read it because it was a romance and not science fiction.  However, one of the members not only wrote fantasy, but romances as well.  She had gone through the story and noted all the plot points and thought that I had a solid plot arc.  She concluded, “You just need to find another ten thousand words and this story will come together.”  I looked over her notes and new ideas sparked in me.  Over the next two weeks, I found those ten thousand words and my novelette came into being.

I took the new manuscript to a different critique group, one where there were more romance writers and was told that the story sounded professional and well researched.  The listeners were intrigued.   It gave me hope.

I decided that I would bite the bullet and self-publish the story as an ebook.  I created a quick cover on Canva, formatted the ebook myself via a combination of Sigil and Calibre and popped the book up on Amazon in October 2014.  In February of 2015, I decided to make it available as a paperback.  To my gratitude, the novelette has gained mainly five and four star reviews and has been a steady seller for the year that it’s been available.

I love that cover! Let me pour iced Starbuck’s coffee for us both, Wendy. What did you find fun/intriguing about writing The Curate’s Brother, and what was difficult?

The Curate’s Brother called to me to write it, or perhaps I could say that Edward Wentworth demanded that I write his story.  Characters are like that for writers.  If you are lucky, they wake up in your subconscious and sort of “speak” to you.  Their situations and lives become like old friends and you want to hang out with them.  I found myself enjoying recreating the settings from Austen’s work, allowing me to enjoy “Persuasion” in my own way and getting to enjoy her characters again.  Edward Wentworth is only a footnote in Austen’s novel, but in mine we get to know him as a real person.

Tell us about your next project and when it may be published. What you said about steampunk intrigues me.

The regency series is coming together.  The second novella was my 2015 Nanowrimo project and is now a completed rough draft.  The final two books are what are left of my original project, plus major revisions to the original that I did in 2014.  All three stories are ready for revision and I hope to have the second part of the series out on Amazon by early summer of 2016.

My steampunk science fiction series, which I have temporarily entitled “Steampunk Wonderland”, is loosely based off of characters from Lewis Carroll’s “Alice in Wonderland”, a book that was originally written in Victorian times.  My characters are humans, not talking animals, but they take on some of the personal quirks of the characters they represent.  Over the years, I have drifted away from Carroll’s work.  If I changed all the names completely, you might not even recognize its roots.  It has become its own unique story.

The series begins in Wonderland, a terrible war occurred twenty years in the past where the Red Queen fought the White Queen.  Alice, the champion of White Republic never came to claim the Vorpol sword and defend the realm.  The White Republic falls. Eventually the Queen of Hearts becomes the reigning monarch of the combined kingdoms, ruling all of Wonderland.  Catherine Heart is a despot who can kill on a whim. Wonderland suffers under her rule.

The first book begins by following the failed marriage of the Queen’s royal assassin and his wife, Rose. They represent the common people of Wonderland.  Rose leaves her husband and takes off on her own, but will he accept this or will he try to win her back?  We also follow Victoria, the heir to the House of Diamonds, one of the four “suit” houses that rules Wonderland under the Queen.  She is promised to the heir of the House of Spades, but the Prince of Hearts has caught her eye and she means to marry him and become the next Queen of Hearts.  The prince is a young man with a lack of choice.  He fritters away his life in gaming “hells” and loose women.  In Victoria, he thinks he sees something different, but is she the right choice for his happiness?  The final main character is Hatter, a conman who is good with business, but unlucky with love.  He is able to attract women with ease, but the one he wants is married to the royal assassin.  He works for the growing resistance to the Queen, but his loyalty is in question due to his former connection with the assassin and his weakness for Rose.

And where is Alice?  She is a major force in the series, but you will have to wait a while until she appears.

Wow! Can’t wait till all are released. Thank you for visiting with us, Wendy.

Let me pour us all another virtual Starbuck’s Iced Coffee before you rush off to Amazon for The Curate’s Brother (I have it!).

Learn more about Wendy Van Camp and her work at:

In 2011, I left engineering to write full-time. Between the years 1992 and 2011, I’ve published 14 stories with Alfred Hitchcock’s Mystery Magazine that have featured the hypochondriac detective Micky Cardex and two stories that did not. The 1998 story “No, Thank You, John” was nominated for a Shamus award. Many of these stories have been included in anthologies and translated in multiple languages. With Neal Shusterman, I’ve also published a science fiction story for the More Amazing Stories anthology (Tor) published in 1998 and co-authored with Neal Shusterman an X-Files Young Adult novel (DARK MATTER) for HarperCollins in 1999 under the name Easton Royce. For Simon & Schuster in July 2012, we published an e-novella UNSTRUNG in Neal's UNWIND world. I have graduate degrees in English and Electrical Engineering.
View all posts by mlknowlden →
This entry was posted in Food, WRITING and tagged Claimed by the Enemy, Fantasy, Fire Magic, historical, Ice Magic, Shauna Roberts. Bookmark the permalink.