Writing Down Rivers & a Christmas Market in Rudensheim: Paris to Prague Part 8 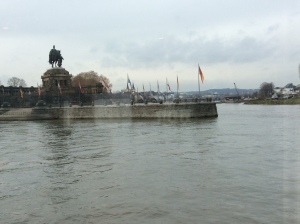 It was a writing day. Since Debra and I did Marksburg castle in 2012, Ken went to Marksburg without us. We did good writing and took a slew of pictures as we passed through the confluence of the Moselle and the Rhine shown to the left.

We picked up the tour groups in Lahnstein at lunchtime. Castle after castle as we traveled down the Rhine that afternoon. Demo of the making of a Rudensheim coffee drink accompanied by a panoply of desserts made a nice break between castle eye candy. Then more pictures though the windows, giving the photos of Koblenz a watery look. As shown here. 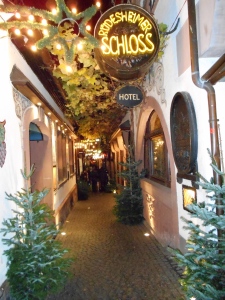 We all signed up do an evening tour of Rudensheim as the Christmas markets are supposed to be good and proved to be so. Cities and villages in Europe create a block or more of booths dressed up for the holidays. Games and rides and food and bands (I heard Feliz Navidad!) and I found a few Christmas gifts too. The Christmas market in Rudensheim went on for blocks in narrow, winding streets, filled with the scents of sausages, tomato soup, coffee, chocolate, mulled wine, and thick gingerbread. After a long walk from the Christmas market to the bus, we arrived dusted in snow. I had a long chat on the bus ride with our Brazilian contingent. The bus took us to Wiesbaden where the boat had cruised to while we shopped, and then the ship took off again while we had a late dinner. All very confusing but well orchestrated.

We found out that fifty cancelled this cruise from another passenger earlier in the day. Viking upgraded cabins for those in standard staterooms as they had waived my single supplement. In the dining room, serving sizes have been noticeably larger. I remarked last night that I think they’re making us eat the absent fifty’s food.

Passed through many lochs through the night, the one to the left was earlier in the day. Also exited the Rhine and are now cruising the Main.

In 2011, I left engineering to write full-time. Between the years 1992 and 2011, I’ve published 14 stories with Alfred Hitchcock’s Mystery Magazine that have featured the hypochondriac detective Micky Cardex and two stories that did not. The 1998 story “No, Thank You, John” was nominated for a Shamus award. Many of these stories have been included in anthologies and translated in multiple languages. With Neal Shusterman, I’ve also published a science fiction story for the More Amazing Stories anthology (Tor) published in 1998 and co-authored with Neal Shusterman an X-Files Young Adult novel (DARK MATTER) for HarperCollins in 1999 under the name Easton Royce. For Simon & Schuster in July 2012, we published an e-novella UNSTRUNG in Neal's UNWIND world. I have graduate degrees in English and Electrical Engineering.
View all posts by mlknowlden →
This entry was posted in travel, Uncategorized and tagged Cities of Light, Paris to Prague, Rudensheim, Viking river cruise. Bookmark the permalink.

1 Response to Writing Down Rivers & a Christmas Market in Rudensheim: Paris to Prague Part 8