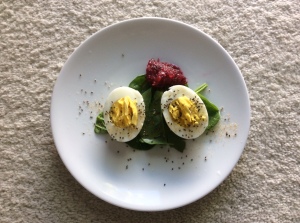 No breakfast interview this month, but return here for the first Friday in February where I will be having a virtual meal with Laura Drake! Now that’s a wonderful coup for a Valentine’s month–especially if you love wonderfully quirky stories, Texas, cowboys and more than a dash of romance.

You and I can still have breakfast this month. Bug eating, in its software and meal worm contexts, will be discussed later. As part of the goals I’ll discuss, my minimalist breakfast is a hardboiled egg with a dash of paprika and sprinkled with chia seeds on a bed of spinach with two tablespoons of cranberry sauce on the side. Since it’s cold in Southern California, I’m having steaming hot organogold coffee.

I’ll be meeting with my writing accountability partner Saturday so I won’t discuss writing goals. We did meet early December to do a 2015 assessment which I summarize below. Feel free to guess from the works in progress what my first quarter in 2016 might include. I’ll will mention some personal 2016 goals (eating bugs!) too.

I continued the plan of hybrid writing and saw works released in both traditional and indie publishing.

The light in my window: my theme this year will be working the bugs out of my life and, in one case, into my life.

I’ve been writing full-time since late 2012/early 2013, and am seeing what works and what doesn’t. In the past four years, I’ve written middle grader reader SF, YA dystopic, adult SF, (New Adult and Adult) mysteries, shapeshifter fantasy and historical romance. All lengths. Besides trying different genres, I’ve also tried alternative markets. Prior to 2012, I focused exclusively on traditional venues. In 2012-2014, with the exception of one novella for Simon & Schuster, I did only Kindle publishing. In 2015, I pursued both traditional and e-publishing. Still working out the kinks, but so far I prefer hybrid publishing. Hope to continue to streamline the processes for both.

Non-writing goals: I plan to increase aerobic training by 25% this year and incorporate more stretching. I also plan to hydrate more: besides water and organogold coffee, I plan to make drinking herbal teas and water infusions a daily practice. At the moment, I have a quart of water with basil, a slice of lemon, and three cucumber slices chilling in the fridge with a 24 oz tumbler of chamomile and green tea mix for tomorrow.

I also plan to continue my farm experiment in 2016 and eating whole foods. Consuming vegetarian food (with the occasional fish) since 2004, I’ve been mostly successful removing processed foods from my diet and will continue to eat as simply and sustainable as I can. I’m excited about growing new items like cowpeas and ground cherries this year while bringing back old favorites too.

I approach adding another form of protein to my diet with some trepidation. Meal worms. Yes, you read that correctly. I’m backing a new Kickstarter project LIVIN Farms Hive, “The world’s first desktop hive for edible insects: empowering you to grow a food revolution straight out of your kitchen!” In April, I’ll be getting a 50 g sample of meal worms to try.

I will remodel a bedroom in the first quarter of 2016 to which I will add the usual house and yard maintenance projects. Not to mention hanging a new bird feeder. I’ve no big trips planned but will host a stream of visitors throughout the year.

I plan to learn Spanish through DuoLingo, read the Bible through YouVersion, and finger paint with an artist friend. Besides knitting bed socks for friends and USO hats for the military, I hope to become proficient at weaving small bags on a peg loom.

In the past, I’ve used coffee shops, parks, hotel rooms, trains, planes and ships for writing. I hope to try an entirely new venue this year. I have a tentative speaking engagement at a high school. I hope to spend more time in museums, arboretums, and leisurely conversations. Not to mention finding hours to read more, especially non-fiction.

Happy New Year to us all and happy reading too!

In 2011, I left engineering to write full-time. Between the years 1992 and 2011, I’ve published 14 stories with Alfred Hitchcock’s Mystery Magazine that have featured the hypochondriac detective Micky Cardex and two stories that did not. The 1998 story “No, Thank You, John” was nominated for a Shamus award. Many of these stories have been included in anthologies and translated in multiple languages. With Neal Shusterman, I’ve also published a science fiction story for the More Amazing Stories anthology (Tor) published in 1998 and co-authored with Neal Shusterman an X-Files Young Adult novel (DARK MATTER) for HarperCollins in 1999 under the name Easton Royce. For Simon & Schuster in July 2012, we published an e-novella UNSTRUNG in Neal's UNWIND world. I have graduate degrees in English and Electrical Engineering.
View all posts by mlknowlden →
This entry was posted in Food, Garden, WRITING and tagged goals, Laura Drake, LIVIN FARMS HIVE, meal worms, UNBOUND, vegetarian. Bookmark the permalink.